Despite the many rallying calls to inflict real change to a predominately male-dominated industry, things are still very much the same.

According to the National Science Foundation (NSF), 72% of the STEM workforce in the US are male, and in the UK, just 26% of graduates of core STEM subjects were women in 2019. But with so many challenges in store for humans, it seems the capitalistic and patriarchal model that has been applied in STEM needs to be rethought.

This was something that has been very much on Ayo Sokale’s mind when I caught up with her recently.

Ayo is certainly a contradiction to the ‘lazy millennial’ stereotype – she is a Chartered Civil Engineer, Project Manager and Building Information lead for the Environmental Agency in Eastern England, has been at the forefront of a myriad of environmental projects, such as her Flood Action Campaign, and is also a Labour and Cooperative councillor for Caversham.

“Everyone asks me [how I find the time to do all these things] and I’ve never actually answered it sincerely,” Ayo tells me. “So, I have various neuro-diversities, which have been challenging for me but have also made me work harder and smarter. Even when I was a kid I would study the school curriculum over the summer!”

As someone on the autism spectrum, Ayo has faced her fair share of personal challenges, and this, coupled with being a woman and a person of colour undoubtedly has forced Ayo to have to work even harder than her peers within STEM. But these obstacles didn’t stop her from wanting to achieve her goals.

“I think even from a young age I had an aptitude for self-development,” Ayo tells me. “That always allowed me to look at ways to do things efficiently or become a better person in an effort to mitigate challenges that I wasn’t really clear on.”

“I would rather have not been bullied or beaten up of course, but I definitely wouldn’t be as strong as I am today if it wasn’t for these experiences.”

As we have already seen, STEM is not the most welcoming place for women and remains a very white-male dominated sector, even after all the advances that have been made. 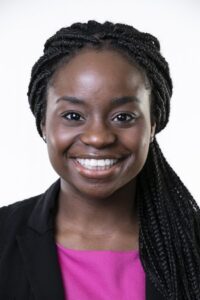 “When I went to university 10% of the people on my course were women, so the numbers are increasing but there’s still an inherent bias about who is leading projects. I remember when I was managing a project and I had a graduate come along and – because he was male – everyone thought he was the boss. However, it would be wrong of me to suggest is just an issue in STEM because I think this is a wider societal issue; I’ve seen it also as a politician. People have such fixed ideas about what a leader looks like or what a smart person looks like.”

So how did Ayo overcome these societal obstacles?

“Honestly, by going for everything and trying to be the best at everything,” she tells me. “I think a lot of status and respect comes from people admiring and being impressed by you, and that isn’t just doing the job sometimes but working more hours than required, or taking on that extra responsibility or going for opportunities in the industry.

“I went for things that would make me stand out; I can’t be a guy, I can’t be older, I can’t be white so I put the emphasis on myself because whilst I can’t change other people’s views by shaming them or speaking to them, I’m in control of my life and my decisions.”

Though her personal effort is truly inspiring, Ayo hopes to see a more diverse landscape in STEM, especially as we as a species are in need of some strong collective actions to solve climate change. However this isn’t only about the diversity of people, we also need diversity of thought.

“I think we often favour homogeneity; we like the person that thinks the same as everyone else in the group,” Ayo tells me.

“I also think we seem to value the same kind of leadership roles; like women are expected to train to be more like their male counterparts. But that’s not diversity. We need to value both [masculine and feminine] traits equally and ask people to be something they’re not.”

“As an autistic person I’ve spent a lot of time masking and it takes a lot of energy. That energy could be better channelled to fight the climate change crisis.”

So perhaps one of the biggest tasks in solving the climate crisis is to alter our belief in capitalism. As is becoming increasingly clearer, consumerism and capitalism are counterproductive to the fight against climate change and this is something Ayo has been writing about herself.

“The assumption of a capitalist narrative, that wealth trickles down and those with it will care for the population, is no longer right. Society couldn’t be what it was without capitalism, but the expansion of capitalism isn’t sustainable – the model of constantly growing is unsustainable.”

“I don’t want young women to come into this industry to be told what they inherently need to be changed,” Ayo says. “But I don’t think we should have hyper-femininity either. It’s the extremes that do us damage. We need the balance. Looking at everything holistically, we need to do the work.

“When we look at climate injustice and social injustice, they’re the same thing and the people who are most damaged by this stuff are usually the communities who are socially deprived. But those are the people that need to be part of the solution.”

Monitoring Your Health with Withings Over the past 12 months, we have been encouraged to stay at home due to COVID-19....