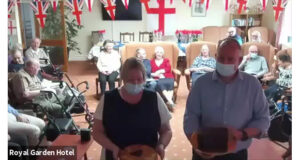 Samsung Flip 2 and Logitech Meetup technology helped residents at two care homes celebrate a joint party via Zoom to mark VE day and is providing continuous enjoyment throughout the year. 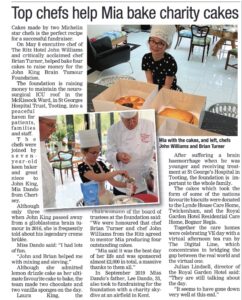 Lynde House Care Home & the Royal Garden Hotel Residential Care Home enjoy cakes that took the form of some of the nations favourite biscuits at a virtual afternoon tea party run by The Digital Line. 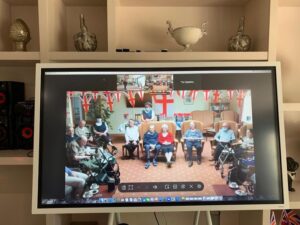 Lynde House Joined the Royal Garden Hotel in Sussex Thanks to New Technology on VE Day. trustedcare. May 2021

Lynde House in Twickenham marked the anniversary of VE Day with the support of The Digital Line (TDL) as residents were brought together through innovative technology with The Royal Garden Hotel in Sussex and both enjoyed a very special Afternoon Tea Event. 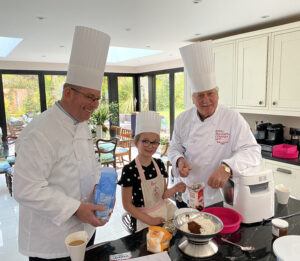 A Bognor care home celebrated VE day with a high-tech tea party this weekend, using a Samsung interactive whiteboard to connect with another care home in Twickenham

Residents at The Royal Garden Hotel on Princess Avenue helped themselves to retro style cakes and homely cups of tea last Sunday, for a VE day tea party which saw them connecting with residents in Lynde House in Twickenham.

To do it, they set up a zoom call on two Samsung Flip 2’s: high-tech digital whiteboards which allowed the residents to talk, listen and interact with each other over the Internet.

The 62-inch whiteboards, which were donated by Samsung and The Digital Line, allowed the two care homes to play games and songs, host quizzes and chat with each other well into the evening.

Air sanitisers such as the new Steraspace range from Airdri help to control infections by killing bacteria and viruses, mould and fungi. As an added advantage the units also remove pollen, pollution, smoke and odours.

The Steraspace range from Airdri is unique in that it works by producing a continuous flow of disinfecting plasma into the air generated by combining photocatalytic disinfection, germicidal irradiation and dual waveband UV technology.