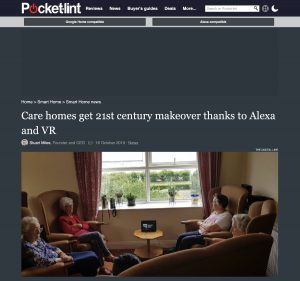 The belief that care homes are out of date could be about to change, following a digital initiative that is bringing a 21st-century makeover to the elderly.

Called Digital Hub, it is already being trailed in a number of care homes across the UK. It offers residents the chance to experience new technologies, such as VR, Alexa and Philips Hue lighting, in order to both entertain and compliment the traditional activities of the elderly and physically challenged. 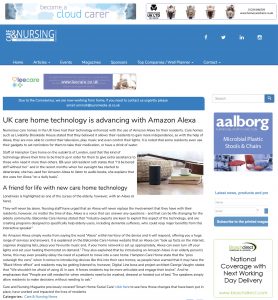 UK Care Home Technology is Advancing with Amazon Alexa – Care & Nursing – October 2019
Numerous care homes in the UK have had their technology-enhanced with the use of Amazon Alexa for their residents. Care homes such as Livability Brookside House stated that they believed it allows their residents to gain more independence, as, with the help of Alexa, they are now able to control their television, play music and even control their lights. It is noted that some residents even use their gadgets to set reminders for them to take their medication, or have a drink of water. Read more here 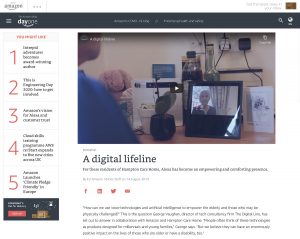 A Digital Lifeline – About Amazon – August 201 For these residents of Hampton Care Home, Alexa has become an empowering and comforting presence. Find out more here 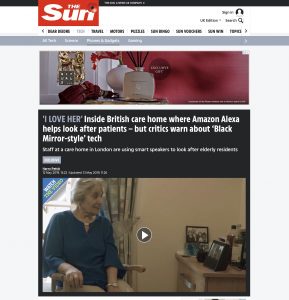 ‘I Love Her’ Inside British Carehome where Amazon Alexa helps look after patients -The Sun – May 2019 Staff at a care home in London are using smart speakers to look after elderly residents. Full article here 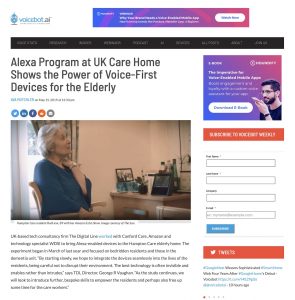 Alexa Program at UK Care Home Shows the Power of Voice-First Devices for the Elderly – Voicebot.ai – May 201 UK-based tech consultancy firm The Digital Line worked with Canford Care and Amazon  to bring Alexa-enabled devices to the Hampton Care elderly home. The experiment began in March of last year and focused on bedridden residents and those in the dementia unit. “By starting slowly, we hope to integrate the devices seamlessly into the lives of the residents, being careful not to disrupt their environment.