Tech For Good – The Digital Line (TDL) are pleased to share an insight into another “Tech for Good” Program.

To help improve resident wellbeing as well as the opportunity to connect two care homes in Twickenham and Sussex for a very special VE day celebration, The Digital Line (TDL) introduced innovative technology. During the lockdown, TDL has been focused on helping more people to connect in the safety of their own environment, often through digital initiatives, with companies such as Amazon and Samsung.

The care home sector has been hit particularly badly by the pandemic and historically the elderly have often been poorly served by technology. George Vaughan, TDL Director said: “Technology should be for everyone, not just the young or the privileged and one of our main goals as an organisation is to ensure that no one is forgotten or left behind when it comes to life improvements through technology. Sometimes all it takes is a small change or a simple alteration to make a big difference in the lives of the vulnerable.”

With support from The Digital Line, residents at Lynde House in Twickenham were brought together through technology with The Royal Garden Hotel in Sussex and both enjoyed a very special Afternoon Tea Event. This was achieved by setting up a zoom call on two Samsung Flip 2’s: high-tech digital whiteboards which allowed the residents to talk, listen and interact with each other over the Internet.

The 55-inch whiteboards, which were donated by Samsung allowed the two care homes to play games and songs, host quizzes and chat with each other over the course of the afternoon event. The experience was further enhanced with retro-style cakes made by seven-year-old junior baker Mia Dando and seasoned chefs John Williams MBE, Executive Chef of The Ritz Hotel and TV personality and award-winning chef, Brian Turner CBE. Their efforts were not only in support of bringing a smile to the faces of the residents as part of this community event but also focused on raising much-needed funds for the John King Brain Tumour Foundation.

Alison McIntosh, General Manager at Lynde House said: “Many of our residents can remember the end of the war and we all know what it meant for our country, so we wanted to celebrate the date and this special afternoon tea event was exceptional. The Digital Line provided us with a large Samsung Flip-screen TV, camera and soundbar earlier in the year which we use for resident’s activities, we also have a project with a local nursery, so the children and residents spent time together on Zoom playing games, chatting and singing which we all benefit from.”

John, a resident at Lynde House said: “It was wonderful to reminisce and to celebrate with all the staff and residents here, joining up with the Royal Garden Hotel was really something different – we’ve all had such fun and lots of cake!”

“Lockdown’s been tough on care homes, and we were hoping to instil some sort of enjoyment within the confines of Covid restrictions,” said Julian Lindsell, Director of the Royal Garden Hotel. Mr Lindsell made it clear that, after a brief adjustment period, the residents took incredibly well to the new tech. He said: “We’ve had the technology for about six months now, so our residents have been playing with it on a regular basis. Some of them are quite technologically shy but, once they realise, they can’t break it, then they’re off and running.” 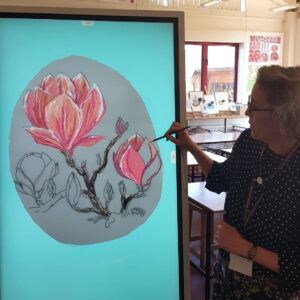