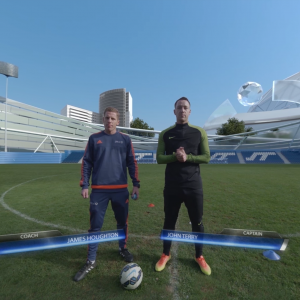 The world of football is constantly evolving. Today you can not only watch your favourite players through the medium of video games you can also play as them with the likes of popular franchises like FIFA and PES. As virtual reality begins its march into the mainstream, one of the modern game’s most iconic players has created an experience that he hopes will bring him closer to his legion of fans.

With the medium still in its infancy, we started by asking Terry what attracted him to the idea of working with VR.

“I met with Infinite360 who showed me the tech and it completely blew me away. I realise that VR is the future and will have a massive impact on training, which I wanted to be part of.

“Being able to transport the viewer to a one-on-one training session, which they wouldn’t otherwise be able to access is an opportunity I wanted to share. I partnered with Infinite360 to produce the John Terry Football Academy as they were able to create a vision of exactly what I would want if I was building my own academy – it reflects my dream completely.”

But does he believe the medium can fully realise and enhance the fan’s association with their sporting heroes?

“Virtual Reality is without doubt fast becoming the future and the academy gives users the opportunity to experience and learn the skills required to make it as a professional sportsperson, both mentally and physically. Academy recruits can stand with me on the pitch and witness the techniques I’m teaching close-up, as if they were right there with me.

“Many aspiring sportspeople would benefit and thrive having one-on-one sessions with players and this is the way I’m able to deliver that. Every fan can feel like they have my undivided attention.”

Is it a gimmick of does he believe fans will benefit from the academy VR experience?

“The academy is there for me to share through immersive videos what I have learned both on and off the pitch – from amateur to professional levels. It also gives a behind the scenes insight into my own life and career experiences. It is the first of its kind and this is just the beginning.”

Utilising this technology for the fans is one thing but is he an advocate of the technology himself? 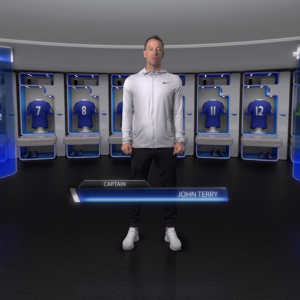 “Yes very much so. I’m a big fan of technology and am always interested to see what’s emerging on the horizon to push things to the next level, which is one of the reasons I love VR!”

As a convert to the wonders of technology does he actively engage on social media?

“It’s great, especially as I am a big FIFA fan! I love playing socially whenever I have the opportunity.”

So do you have any other plans to expand into other areas of technology, beyond VR?

“For now I will be focusing on the John Terry Football Academy, updating the application with new and innovative features. My driving ambition is to give something back through this uniquely personal medium and help those at all levels who want to get into football.”

So what is it all about?

Well through the medium of VR headsets like the Facebook owned Oculus Rift or smartphone alternatives you are transported to the entrance of the academy, where you can view famous quotes, explore the trophy cabinet and engage with JT’s virtual reality receptionist.

From here you are given the opportunity to visit the dressing room that is showcasing several Chelsea football shirts – including the famous number 26 that Terry has worn throughout his career – and you are provided with the option of taking training sessions or learning about sports nutrition or motivation.

As a starting point the concept is sound and gives you a sense of where else this type of software could take its audience.

Tech Image Of The Week 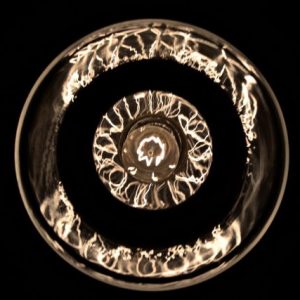 Tech Image Of The Week

This is just for fun but can anyone guess what this is a picture of? All credit for this outstanding photo goes to our resident...