There are few clichés as tired as the desire to get fit at the start of a new year – what greater January tradition is there then signing up to a gym and declaring that you “really mean it this time” about getting toned and healthy? But, as is becoming more typical with our couch-locked species, video games and TV are far more alluring than pounding the treadmill.

The Wii-Fit tried to make gaming more strenuous but became another novelty doomed to dwell in the darkest corners of game exchange shops. But the Wii Fit didn’t have what start-up Black Box has; VR technology, something the start-up has used to create a virtual workout, with very real physical consequences.

Revealed at this year’s CES tech show in Las Vegas, Black Box VR has created a 30-minute full-body virtual workout that sees users enter an arena, battle avatars and each other in VR, all while working out in the real world. The game utilises HTC’s Vive headset as well as a training machine to create the ultimate visual and physical experience. Special VR controllers that can be strapped to arms are also employed to ensure a hands-free experience and allow users to grip more gym equipment.

Founders of Black Box Ryan DeLuca and Preston Lewis, who both started bodybuilding.com, hope to open gyms across the US with the machines waiting for individual users, though one cannot help but picture something akin to Black Mirror’s dystopian exercise bikes in Fifteen Million Merits.

But virtual gyms are just the first step in this tech/fitness enterprise; there’s even the possibility of a home-version being developed, so you don’t have the excuse of it raining outside or whatever your get-out-of-gym-free-card may be.

Truth be told, it’s hard to look at this development with the unrelenting positivity that tech-companies seem to radiate – and many at CES shared concerns about the safety of the machine and VR physical exercise in general. But with a future almost certainly written in code, and with the average person struggling to keep up exercise for more than a few weeks, perhaps it’s time to embrace this new relationship between physical fitness and technology, for a healthier and more exciting future? 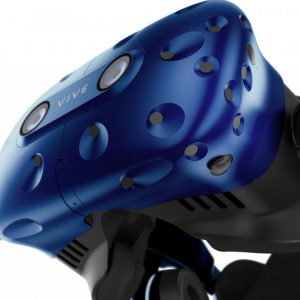 HTC unveils its 'Pro' virtual reality headset at CES. Virtual Reality is about to go up a level with the announcement...