Our personal data that companies hold, or sell on to third parties, is worth millions which is why the likes of Facebook prosper. Right now our data is protected by the ever more stringent European Union rules. Next year tougher laws are coming under our EU membership.

Traditionally, the UK has had a more relaxed and flexible attitude to protecting our data, while the EU is more protective of consumers.

So, together with all the other uncertainties involved in Brexit, where does that leave us in a couple of years’ time? Will the rules made in Europe still protect us? Data protection will inevitably be thrown into the mix that will be affected by hard or soft Brexit.

Our membership of the EU also currently makes it possible for us to trade data with the USA, as part of the EU’s data sharing agreement. This involves researchers and businesses who rely on that arrangement and could well be facing higher costs.

So what happens once Brexit takes effect? One thing is for sure leaving the EU gives us a more complicated future and the next two years will bring doubts over the security of consumer data at a time when consumers already feel that their personal data is under threat.

The UK and USA are banning laptops from cabin baggage on aircraft flying from Turkey and some Middle East and North African countries.

As an anti-terrorist precaution, electronic devices bigger than smartphones are being banned as a result of “evaluated intelligence”.

The UK ban followed that announced by the USA, and means that passengers will not be able to carry laptops in cabin luggage on inbound direct flights of carriers, including British Airways and EasyJet, flying from Turkey, Lebanon, Jordan, Egypt, Tunisia and Saudi Arabia.

An incident in Somalia last year saw al-Shabaab insurgents smuggle an explosive-loaded laptop on a flight from Mogadishu. It blew a hole in the plane which was still flying low enough for the pilot to land the safely. Other recent attacks on aircraft have included explosives hidden in items like a drink can, shoes, underwear and liquid explosives replacing printer ink.

Some experts are saying that putting electronic devices in the hold seperates them from accompanying passengers whose carry-ons can be individually inspected and the passenger questioned.

A recent study by consultancy firm Price Waterhouse Cooper claims that over 10 million UK workers are at risk of losing their jobs in the next 15 years because of breakthroughs in robotics and A.I., with some sectors possibly ceding up to 50% of their workforce.

With automation likely to boost productivity and in turn create new jobs, the way we work and perhaps even whether some of our work colleagues are actually human will come more into question. With a separate report from Gartner claiming that 65% of current school children will end up fulfilling roles that don’t even exist in the current job market, the predicted speed of change is breath-taking.

So what does this mean for those members of society currently occupying the roles most under threat – mainly in the lower paid market – who could lose out to this new era of technology?

PwC claims that 2.25 million jobs are at high risk in wholesale and retailing – the number one sector for employment in the U.K. – with an additional 1.2 million manufacturing jobs also under threat, another million plus in administration and support services and over 900,000 in transport and storage.

Even nurses’ and doctors’ roles could be affected, with some 30% of nursing tasks, including information gathering and giving non-intravenous medication, open to automation.

Doctors are already being outperformed by computers in diagnosing lung cancer, and robots have outperformed surgeons in performing routine procedures.

There’s no doubting the benefits this brave new world might bring to business. Pensions, holiday pay, maternity leave and sick pay would become unnecessary for an automated workforce. Working hours become almost irrelevant and office politics would be eradicated.

On the flip side, it got me thinking about how we might support a society in the future, where tax revenues from employees could drop dramatically because of automation.

We’ve been through changes in the past as technological advances during the last industrial revolution cost jobs but then introduced new ones and yet this latest – what some might call ‘fourth industrial revolution’ – appears to be moving at such pace that it may take longer for society to adjust.

The PwC report addresses this very issue, concluding that there could be an argument for government intervention to offer some form of universal basic income to supplement the change.

A.I. and robotics are likely to completely change the job market and place even more emphasis on better education and perhaps – dare I say it – family planning.

The future is all about data. Information will be the great commodity of this new, emerging age and there is likely to be even more demand for those in society who have creative skills or critical and emotional intelligence.

Another interesting assessment from the PwC report is the perceived effect new technology will have on gender, with women less likely to lose their jobs than men. In part they attribute this finding to the fact that women tend to work in sectors that require a higher level of education and also social skills. Putting that in simple figures, 35% of male jobs were identified as being at risk against 26% of female jobs.

Could we finally see the balance of power shift to women and robots in the next 25 years?

Watch out guys! You could be left at home minding the servers!

"Our House" From Selfridges 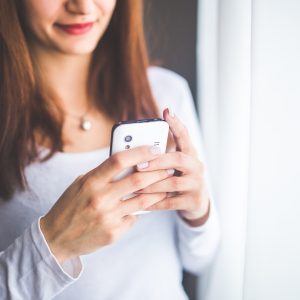 As a woman who only learnt to embrace technology over the past decade, I have gradually evolved from technophobe to technophile....