Blind runner competes in NY Marathon with technology as his guide.

At the world’s biggest and most popular marathon, the TCS New York City Marathon, among the thousands of runners will be one man running alone.

And for British runner, Simon Wheatcroft, that is a tremendous achievement because he is blind and running without a guide thanks to touch technology to warn of obstacles and help him navigate the five-borough course.

The Doncaster-based athlete’s wearable device allows him to navigate the route while detecting obstacles and sending small vibrating alerts to arm and chest pads.

Simon lost his sight due to a degenerative eye disease when a teenager and he has helped to develop the device called Wayband  with WearWorks.

Having begun running after losing his sight Simon says the technology has enabled him to push the boundaries of he can achieve and wants it to both inspire others and towards technologies to assist everyone with sight impairment, whether running a marathon or walking through their home town.”

The Wayband emits haptic signals that guide the runner towards the destination. The device is paired with a smartphone app, similar to the workings of a Fitbit or Apple Watch, and then programmes the destination into the app. During the race, it provides slight vibrations to tell Simon when to turn.

With his own website called &Adpt Simon used to run with a buddy to help guide him and now wants to use the WayBand to win spectators’ hearts at New York City Marathon.

Through technology, he says, people can gain independence and change perceptions. 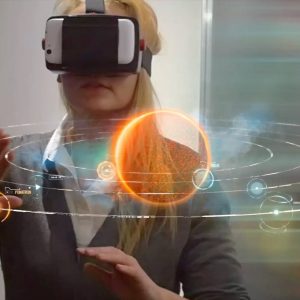 Both Sides of the Reality Fence The rise in popularity of both Virtual and Augmented Reality systems is leading many to suggest...