In an interview with the Observer newspaper, the children’s commissioner Anne Longfield has gone on record to criticise the amount of time children are spending online, encouraging parents to be more proactive in dissuading them from “bingeing on the web”.

She also had harsh words for the way the social media giants manipulate young people by drawing them in and encouraging them to spend more time surfing when they could be outside exercising.

She has drawn comparison between online usage and junk food, suggesting that the potentially harmful effects are similar in many ways.

She went onto say: “It’s something that every parent will talk about especially during school holidays; that children are in danger of seeing social media like sweeties, and their online time like junk food.”

In 2016, industry watchdog Ofcom said that for the first time, the internet overtook television as the most popular media pastime for children in the UK, with those aged between 5 and 15 spending an average of 15 hours a week online.

Whilst her arguments have merit, we also need to temper her outrage with the reality that the world has changed over the last decade and technology is a major part of our existence as 21st Century citizens.

The generation of young people moving into schools and further education – the digital natives – are wired into the system and have known nothing outside of this their entire lives.

We as digital immigrants are always going to struggle to understand that fact and naturally throw obstacles in the way to justify our own concerns and failure to embrace the pace of change as quickly.

Previous generations grew up playing outside for more of their young lives because the world was a different place – not just because there was no internet. It’s an easy, almost lazy argument to suggest that we are becoming unhealthier because of computers. I can remember the same things being said about watching TV (even when there were just 4 channels!) and playing computer games.

It seems like only yesterday that the newspapers were alive with the horrors of Grand Theft Auto and how the console gaming generation was about to give birth to an army of law breaking hooligans that would run riot across Britain. Did it ever happen?

If anything, the real enemy is diet.

Many studies have shown that whilst less exercise has an impact on our health, the quantity and quality of the food we consume can be just as damaging – if not worse.

I realise it is easier to drink down a litre of cola in front of a computer screen than it is whilst playing a game of football with your friends but if your preference is towards sugary drinks, you’ll consume them regardless.

The answer lies somewhere in the middle and to take a sledgehammer approach to technology by blaming it for all the health issues amongst youngsters is to ignore a plethora of other contributing factors.

I, like most parents, have had to remind my children that smartphones at the dinner table are a no-no and it is certainly the case that limits and restrictions still need to be applied to the under 11s when it comes to tablet and mobile usage. But are these any different to insisting that your teenagers need to be back home no later than 11 on a school night or movies with an 18 certificate are out of bounds for anyone under that age?

I will conclude by saying that I have seen my five-year-old nephew react more badly after a can of fizzy drink than he ever did after an hour on his mother’s iPad so when we are highlighting the negatives about what our children consume, lets just remember that consumption comes in many forms….

Is VR the perfect health and wellbeing tool? 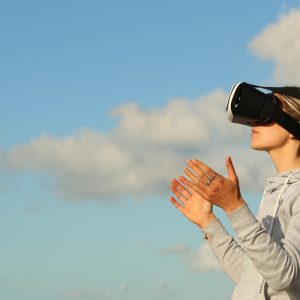 Is VR the perfect health and wellbeing tool?

Virtual Reality is one of the many tools which enables users to completely focus and zone into their surroundings, it fully...